Like animals and plants, people are made to grow. Running backwards is hard to do. Growing backwards is impossible. So we keep on going (growing) on and try to live the good life, until Society hits the wall. However, before that tragedy really takes place, mankind will be saved by an eruption of innovation. Growth in Quality takes the place of sheer Growth in Price and Volume. But how do we measure Quality? And how do we bring Business and Society back together? That are some of the questions that long for an answer. Onto A New Growth Approach, part 1.

Money is easy to count, quality not. How do you measure your life? How much do you feel? Both money and quality represent a certain value. For money you can buy things that usually have a price. Quality has a price too, but it’s more disputable. There is no accounting for taste. Man can be poor and happy at the same time. Even in Bangladesh 85% of the people is happy to be alive, according to Charles Kenny, research fellow at Think Tank New America Foundation in Foreign Policy. For a very long time the Wealth of Nations was measured by Growth Domestic Product (GDP), a summing up of all products and services produced in a certain country during a year and expressed in terms of money (dollars, euro’s, whatever). But it’s not all gold that glitters. Since 1973 (Club of Rome, First Oil Crisis) for lots of people it came to light that economic growth is endangering the future of the planet and is destroying more than it is creating. A new kid was born: ‘Sustainability’, often linked to a broader concept called ‘Development’. Both are constructions of the inner mind, like Wealth, some kind of subjective reality you may say. As human beings we give meaning to the things we see, hear, taste and feel. Let me add two more concepts that are very popular in circles of welfare economists: capability and capacity. On first notice they have the same meaning.

a. Animals in the zoo have lost the capability to catch food for themselves.

b. Animals in the zoo have lost the capacity to catch food for themselves.

So ’Capacity’ and ‘capability’ are interchangeable in (a) and (b)? If not, what is the difference?[1] [1] The capacity of a machine is the maximum this machine can produce in a certain length of time (a day, a week, a year). The capacity of a person is what that person in a standardized, controlled environment can do. The capability of a person has to do with the performance this person can actual deliver in his or her daily environment. That’s not only a matter of having a job and as a consequence personal income, but also of education, health, all kinds of barriers and the freedom to choose.

According to Noble Price Winner Amartya Sen ‘the capability approach focuses on human lives, and not just on the resources people have, in the form of owning – or having use of – objects of convenience that a person may possess’. ‘Income and wealth are often taken to be the main criteria of human success,’ Sen says. ‘By proposing a fundamental shift in the focus of attention from the means of living to the actual opportunities a person has, the  capability approach aims at a fairly radical change in the standard evaluative approaches widely used in economics and social studies.’ [2] [2]

Central in Sen’s approach was and is the concept of freedom. For Sen it’s the purpose of all actions and the means for those actions in one. In the joint action with another Nobel Prize winner, Joseph E. Stiglitz, however, attention switched to the Quality of Life as the main objective. This concept includes the full range of factors that influence what we value in living. These factors are measured through people’s responses to a standard set of questions. The indicators of someone’s Quality of Life and the accumulation of all personal results into some kind of community score provide an opportunity to enrich policy discussions and to inform people’s view of the conditions of the communities where they live.[3] [3]

Loaded with these insights we return to our own Matrix-approach.[4] [4] The Matrix can be perceived as a tool as well as a compass at the same time. The Matrix helps to pinpoint where one stands, which direction is desirable and how to get there. Changing is never easy. Most people, organizations, governments and societies stick to their habits and are only up to something new if someone or something first disorganizes the status quo.

The Matrix for sustainable development is loaded with concepts, that can be used by citizens, business men and governments alike, in order to stimulate or force a transition from one level in the development of People, Planet and Profit to another. It can be used in so called network steering as well.

Each concept is characterized by three developmental stages that symbolize three major stages in development in general: destruction, deconstruction and construction. These notions are rooted in philosophy. The second dimension of the Matrix has to do with three kinds of instruments and attitudes that help people, companies, governments and other organizations to make developments sustain beyond the now living generations:

At the moment of writing, May 2012, the economy still isn’t out of the doldrums. Most concepts are stuck in the destruction mode. Just to let you taste the dimensions of Development (the less known twin sister of Sustainable) we will show you around the lab. Try to feel the tension between the different stages: 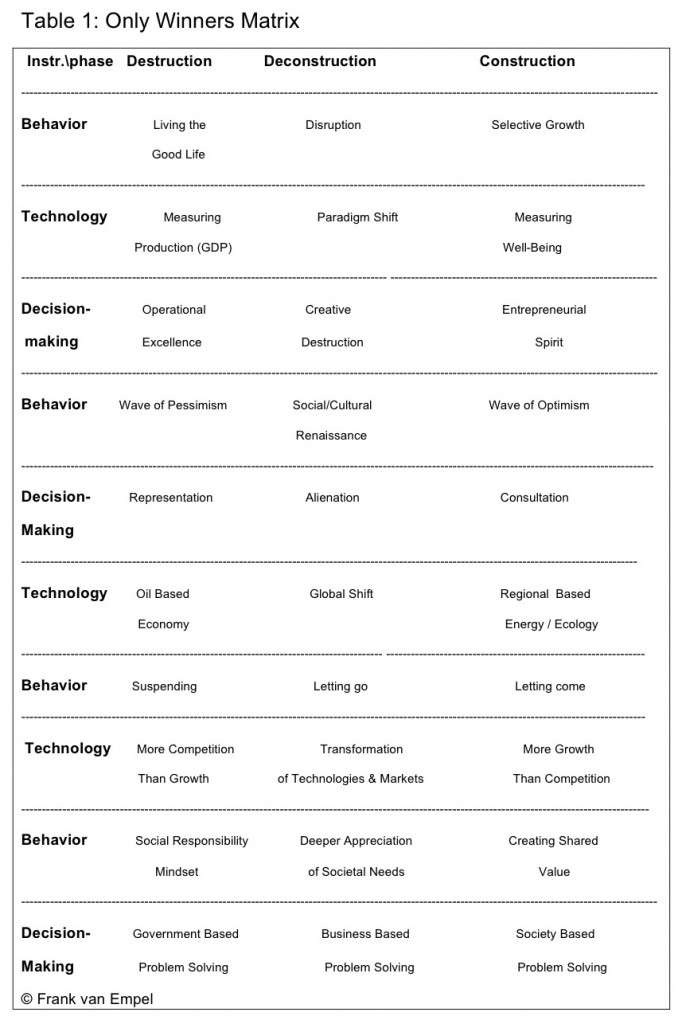 Most people have strong impulses to create positive alternatives for bad situations. They are afraid of economic crises that destroy wealth and jobs, so they keep their hands on their wallets for some time, but then suddenly they wash away the dirt and laugh away misery. Like Philip E. Auerswald in his book The Coming Prosperity they argue that it’s time to overcome the outdated narratives of fear that dominate public discourse and to grasp the powerful momentum of progress.