Why build a new energy infrastructure by investing in coal-fired power plants instead of in renewables?

Return on investment of fossil fuel power is a blockade for renewable energy generation. Once states (i.e. taxpayers) and energy companies paid huge sums to mine and burn coal, to gas a power plant and to drill and refine oil the road to solar or wind –clean and if required de-central – energy production and supply narrows. The invested money plus interest has to be earned back.

Given this, developing countries with a growing need for power are better off when they start the right way: investing in a clean renewable energy infrastructure, instead of copying the wrongdoings of the West from last century. Developed countries ought to support such accomplishments, not at least for their own benefit.

Let’s go to South Africa. Mpumalanga to be precisely, situated in the East of the country, bordering Mozambique and Swaziland. Mpumalanga means ‘the place where the sun rises’ in Swazi, Xhosa and Zulu language. 20.000 km2 of Kruger National Park lay in the area, as well as other reserves for game and wild life.

In ‘Renewable energy production as trick & trade’ on Ecolutie we write about the large coal supply stacked in Mpumalanga mines. The stock of black gold has been mined for already some 100 years and much of it is being sold to obese energy consumers like India and China. The South African government wants to put a halt to selling out, to secure that there will be enough coal left to satisfy the growing energy demand of the own population, writes Mining Weekly [1] in the online edition of February 2, 2011. Eskom, the state owned South African Energy Company, responsible for 95% of the countries’ energy generation and 45% of the power of the African continent, is building a large coal-fired power plant to turn the national fossil fuel treasure into usable energy.

The World Bank supports the smoking industry through subsidizing this coal burning power central – capacity of 4.8 GW – with a loan of € 2.1 billion to Eskom. The total loans of the World Bank to coal projects in 2010 amounted to € 2.4 billion (¼ of all energy loans by the bank). This is not counting the money for connecting Indian coal power plants to the grid, which adds another € 7 million to sustaining black energy, according to Mondiaal Nieuws [2]. The World Bank behaves like a parent equally giving each child the same: renewable energy projects obtain € 2.4 billion as well.

The Eskom [3] corporate website states: ‘On 29 February 2008 Eskom awarded contracts worth about R31,5 billion ( app. € 3 billion) for its “Kusile Project [4]“, a coal-fired power station being built near Emalahleni in Mpumalanga. This station is expected to be completed in late 2016. Terracing work begun in mid 2008 and the first unit is planned to be online by 2013.’

The Kusile project is one of the coal-fired plants the World Bank gave the loan for. Among others, the South Durban Community Environmental Alliance (SDCEA) protests. ‘Eskom is South Africa’s biggest emitter of the greenhouse gases that cause climate change, and want to continue increasing their emissions by expanding their coal fired power stations’, the SDCEA [5] states in the flyer designed for a picket to torpedo Eskom’s plans to raise energy prices because of the big investments. 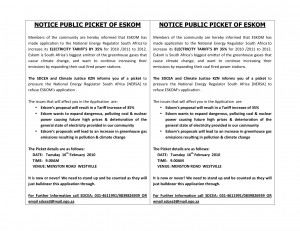 Eskom published the companies’ defence on the corporate homepage titled memorandum [7] to NGO: ‘Most of the matters outlined in the memorandum are of national importance and need to be dealt with as part of a continued country dialogue.’ The organisation argues that South Africa is in desperate need of more energy, that price increases are unavoidable, the poor will be spared and that the company is build on the three pillars of sustainability, trying to maximize economic, environmental and social returns. The letter addressed to the chairperson of the SDCEA ends with the words: ‘We will continue to make Eskom a key part of realising our nation’s dream of a better life for all.’

What remains is the arguable choice of putting another coal-fired plant to work instead of investing in renewable energy supply. The development of a 100 MW Wind farm and equally productive solar power plant seem a little meagre as counterparts. Especially since the Kusile generator is being build in the region containing several reserves, one of them the famous Kruger National Park (World heritage) and in an area where people suffer from air pollution due to coal mining. The Dutch news television programme Netwerk [8] reported last June – 2010 – on the costs of coal, explicitly coal imported to the Netherlands from Colombia and South Africa. The broadcast was called ‘Energiebedrijven medeplichtig aan moord’ (Energy companies accessory to murder). Dutch energy companies are accused of buying coals from unscrupulous suppliers. One third of the import originates from South Africa: ‘Apart from serious environmental damage, chronically health problems pester the local population. According to a house-doctor in Witbank (Emalahleni Local Municipality sited in Mpumalanga) 20% of the population suffers from asthma and long emphysema due to the dust that is released by coal mining. The global NO2 emission map [9] published by the environmental satellite (Envisat), of the European Space Agency (ESA) shown above, supports the claim of the house doctor. The Mpumalanga region is burning and alarming red.

South Africa is the 30th driest country in the world, claims Capam [10], Common Wealth Association for public Administration and Management. In reference to Mpumalanga, the organisation writes in the water programme for preschool: ‘Mpumalanga Province has dry rural areas, with lack of access to potable water. Growing mining industry and agriculture increase demand for water whilst contributing to water pollution.’ And further on in the report: ‘Water is critical for a sustainable future for South Africa. By 2030 South Africa will not have enough fresh water to address the needs of the fresh water to address the needs of the population.’

Mpumalanga counts 270 fresh water lakes among which the largest natural fresh water lake in South Africa, the Chissie Lake. According to Jenifer Russell, University of Johannesburg, the water from Chrissie Lake is of so pure a quality that it could be bottled and sold straight away. Catchment areas of four main rivers come together in this county of natural richness and resources: the Vaal, Komati, uMouluzi and the river Usutu. They flow from the mountains into the low lands.

Eskom revitalized the coal mine Camden situated in this area. The power plant was established there in 1969 and closed down some twenty years ago. Reopening the so-called mothballed coal-fired plant already led to economic activities of close by community Ermelo.

Experts claim that the quality of the water in the area will be affected severely by coal mining activities. In particular places the damage is already done, states Afrika Nieuws [11]: where the river Wilge flows into the reservoir Loskopdam fish and crocodiles died in large numbers by poisoned mine water.

In the case of Camden, Eskom writes on the corporate website: “We have ensured that local opportunities are shared by contracting specific percentages for empowerment groups; and that local workers, in particular around project sites such as this one, are trained to become employable mobile labour” said Mpho Makwana, Eskom’s Chairman.’ And further on in the same article [12]: ‘Makwana emphasised Eskom’s commitment to renewable energy to diversify its generation mix. The dominance of coal-fired power stations would be reduced through an increasing supply from nuclear and renewable energy sources, such as wind and solar power. Eskom’s capacity expansion programme will not meet all the energy needs of the country which the Department of Energy estimates will need to add 52 248 megawatts of new generation capacity by 2030. Additional contributions will be required from Independent Power Producers (IPPs) and imports from neighbouring countries.’

The issues of South Africa are in some ways the same as in Brazil, dealing with the Cerrado Area [13], or China building huge hydro power [14] plants to feed the growing economy. When a nation is struggling to battle poverty, how can it be held accountable for choosing the cheapest, fastest way out? Mpumalanga Province is rich of natural resources (coal included), the population is poor.

If the rest of the world wants to benefit of the natural richness, preserve endangered species, maintain global bio diversity, battle climate change and prefers environmental responsible solutions, it has to support the inhabitants of these regions and countries.

The biggest opportunity is in creating a future proof sustainable energy infrastructure right away, instead of investing in fossil fuel and polluting plants, machines and methods that have to earn return on investment and thus have to keep on going for the next twenty or more years. The loan by the World Bank to build a 4.8 GW coal burner is an example of wrongdoing. It reduces the chances for South Africa to become clean on energy matters. Many are aware of this: The US amongst others, abstained from voting on stimulating South Africa’s fossil fuel power plans. The nonvoting governments worry about the negative consequences like emission of pollutants, the environmental damage fossil fuels are known to cause as well as the impact repayment may have on the South African Rand. Abstaining is a signal, but a rather weak signal. These governments should have objected strongly against such a loan as well as that they should support South Africa in building a clean energy infrastructure.

The challenge is now. It is time to think different; build energy infrastructures for the future. Get out of the old systems of rewarding mega projects that pollute and cause health problems and start to think and act together on creating a new, clean, healthy energy supply.

‘Coals kill every day’, states former Major of New York Michael Bloomberg and puts his money where his mouth is. His charitable foundation will donate $ 50 million to the Sierra Club’s Beyond Coal campaign to help the US largest environmental pressure group fight the biggest source of airpollution: coalburning. The aim is to shut the plants down, one by one. More on Time [19], July 21, 2011.