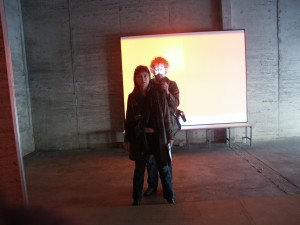 (Escape From The Make-UP World II)

The first part of this story was focused on experts, governors, managers and politicians as powers that want to control the lives of wilful individuals, but have to fight against a rather new phenomenon: social networks. Friend and born entrepreneur Salem Samhoud noticed that there was missing one category in the story: the entrepreneur. He’s right, but at the same time outdated. The old style entrepreneur has lost ground to the networking wilful individual who can be an entrepreneur, but more often than not is a middle-ranking official.

In Escape From The Make-UP World I we introduced the ‘wilful individual’, an ‘independent’ member of several networks. His (or her) facebook & linkedIn friends are a kind of buffer between him and the World. They are his back up, his mainstay, his ‘self expansion’. Together they’re strong. They are with so many, that if they all are heading in the same direction, they simply overpower experts, politicians, governors and managers. They form a crowd, a multitude, completely different from the crowds in the past that blindly followed some kind of leader or role model. The modern crowd is a building of wilful individuals.

In this new order, with the wilful individual central stage, change begins with small acts that may look pointless in the beginning. Acts of resistance, acts of bold defiance, or acts of witty disobedience. Acts that blow up political regimes, that challenge big companies, that deconstruct bureaucratic institutions and make them more human. Change not only as a reaction to a situation, but also as a conscious act, sometimes apparently out of the blue.

The wilful individual shows the way, but also the other way around: the crowd tells the wilful individual what to think, what to do, how to act. What at first sight appears to be individual choice, in reality is socially mediated and constructed. This way individual change is made much more likely and easy since it is a part of a collective shift. The question of politicians, governors and managers is: is it possible to influence this change and curve these processes in the direction they advocate? The answer is feeble: it depends. If it is confronting, hostile, provoking, then one unwilling individual can feed and mobilise a crowd of friends and followers in the first, second, third, whatever, grade. This multiplier effect is a rather new driver of change that is as powerful – if not MORE powerful, then the more classical driver of change: the entrepreneur.

According to economist and political scientist Joseph Schumpeter [2], an entrepreneur characteristically innovates. He deconstructs ‘what is’ and paves the way for  ‘what becomes’.  A process known as ‘creative destruction’.  A typical entrepreneur introduces new technologies, increases efficiency, productivity, or generates new products or services. He starts a company and leaves it when it’s getting to big to handle for one person. An entrepreneur acts as a catalyst for economic change. But, as soon as the managers march in and take over routine tasks the magic of entrepreneurship disappears. Routine drives out creativity. Experts, governors, managers and politicians with their tax systems, their subsidies, their strategies and policies, their laws and rules, spoil the party of the entrepreneurial individual. Entrepreneurs are masters in opportunities and risks, but their handicap is that they are cocky. They don’t accept someone beside them and certainly not above them. That’s why they started their own company. The entrepreneur still is and will ever be a driver for change, but he is a less powerful driver than the wilful individual with his/hers extended networks.  Entrepreneurs thrive in a classical free market economy, but get lost in a network society, where the in social networks encapsulated wilful individual – the citizen, if you prefer that term – rules.