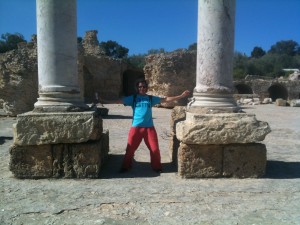 Sustainable development is not about evolution, competition and the survival of the fittest; it’s about ecolution, working together and the fitness of us, the survivors.

Over a hundred years ago Darwin and Wallace in their theory of natural selection, or the survival of the fittest, explained how evolution could have happened in terms of processes known to take place today. It gives insight, but no quick fixes. As a matter of fact we can be fairly confident that the ‘nature’ (i.e. the genetically determined capacities) of human beings has not greatly changed since the Neolithic revolution, about 7.000 years ago. Apparently that is too short a period for major evolutionary changes.[1]

Evolution is too slow for any policy or strategy. That’s why we try out a rather new concept, that’s only one character away from Evolution on a standard European keyboard: Ecolution. In the economy, nor in ecology or social affairs the survival of the fittest is a matter of consideration, governmental policies or political strategies, let alone business visions and missions. In politics and policies the main issue of business and societal reflection will become the fitness of those who survived.

We start with a few assumptions, in order to define the framework within which we like to discuss this issue.

Both works taken together form a dichotomy. In the Theory of Moral Sentiments Smith investigates the sympathetic part of human nature. In the Wealth of Nations he investigates its selfish part. In the slipstream of TWN follows a long parade of famous economists from all kinds of ‘schools’, for example: the classical economists David Ricardo, John Stuart Mill, Karl Marx and Thomas Malthus; the neo-classical economists Alfred Marshall, Knut Wicksell and Irving Fisher; Gamers John Nash and John Van Newmann; monetarist Milton Friedman…

The by many economists neglected TMS-Parade is much shorter, but has famous names as well: Michal Kalecki, John Maynard Keynes, Amartya Sen, George Akerlof, Joseph Schumpeter, Mark Gvanovetter, James Buchanan, Mancur Olson… They are on the right track, but lag behind neo-classical economics in persuasion power and political support. A counter-offensive will be necessary to get a grip on the environment. ‘A whole new environmental economics needs to be developed going far beyond the narrow vision of mainstream Micro-economics in order to come to grips with the issues relating to “sustainable development”,’ Prof. P.R. Dubhashi agrees.

The ‘narrow vision’ of mainstream micro-economics has to do with its unsound assumptions mentioned above, its preoccupation with the short run rather than the long run, with much more static state than dynamic changes, with money and wealth rather than welfare and well-being. ‘The preoccupation with theoretical and mathematical equations rather than the problems of the day has reduced Economics to “esoteric[4] irrelevance”,’ says Prof. Dubhashi. Eminence grise, Amartya Sen described the selfish calculating neo-classical economists even as ‘rational fools’.

Professor P.R. Dubhashi, from GOA University, India, sums up some weak axioms of neo-classical (micro) economics[5], the most common economic theory for more than three decades, in designing economical, financial, political, institutional, governmental and personal strategies for the future.

A scientific attack on neo-classical axioms[6] for strategic decision making and planning:

In order to keep our own Ecolution Theory both simple and valid, we let it rest on four assumptions:

‘Opposing’, ‘competition’ and ‘rivalry’ are words that do not refer to a world where everybody works together to get the maximum out of available resources in a green and clean way. On the contrary, they are combative expressions that refer to Darwin’s survival of the fittest and the accompanying evolution theory.

The neoclassical foundation of economics and the main part of Game Theory make people think about the others in terms of competitors, opponents and rivals. We however claim that depletion of resources – the end of natures’ supply – will lead societies back to the Moral Sentiments side of the spectrum, where necessary co-operation decides the outcome. This u-turn of economics is elaborately researched and described in ‘Only Winners[8]’. The Only Winners philosophy invites people to think in terms of allies, partners and friends. A totally different world, with other values: trust instead of suspicion, empathy and sympathy instead of selfishness, ecolution instead of evolution. All of this out of self-interest, namely the survival of the species man.

Viagra is the most famous ‘love pill’ in the world, but it is not the only option for you. The majority of men who tried both brand and generic pills state that Cialis (the most famous and top-quality generic drug) works better. It is up to you to decide whether you choose brand pills or buy Cialis, but ED patients state that:
Now it is possible to avoid awkward publicity if you buy Cialis online in our reliable web pharmacy. To purchase Cialis online simply place your order, use your credit card to pay for your pills, cialis receive your drug per post in a decent package and start your way to perfect men’s health!