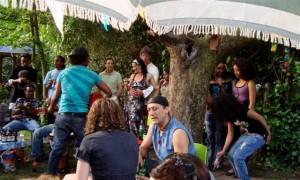 More on this: nonfiXe

‘The biggest threat to humanity, is not the evil of the bad persons. It is the passivity of the good ones!’ Martin Luther King

Nationalism is always just one step around the corner. As soon as the economic engine starts to sputter fascists, disguised as politicians, come out of their holes to spread their lies. They smell blood. Unemployment is blamed on foreigners coming here to drive Dutch people out of there jobs. ‘They eat our food, they spend our money, use our wives and daughters, steal our phones,’ they say. A solution is easily found. Close the door. The debt of Greece recently even was a reason to reïnvent the Dutch guilder. That their own country number 3 worldwide in debtbuilding is, doesn’t suit them. So they ignore it. Mama and uncle Jeff don’t know it, so why should théy care? Facts are of no importance to them, they pick up what fits and hear what they want to hear.

Everyone is free to think and say what he or she wants to in a country like ours. No problem. The frightening part however is the lack of opposers. It cannot be a lack of arguments. At your service:

[1] Gross domestic product (GDP) refers to the market value of all final goods and services produced within a country in a given period.

[6] YER is an international recruitment agency that focuses on Bachelors and Masters; Graduates, Professionals, Executives and Directors for Permanent and Temporary positions.