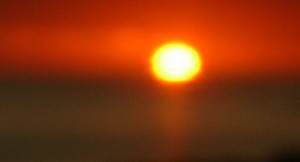 [1]Some people just don’t get it: sus-tai-na-ble de-ve-lop-ment. ‘Nonsense! No development can go on forever,’ they say. ‘There is a limit to the carrying capacity of the Earth. World population and the economy have to stop growing a given time.’ The fact that the universe has been expanding from the moment of creation and is in constant state of change, does not impress them. They are simple cowboys, not spacemen.

The cowboy is the symbol of the illimitable plains. A tough guy, who fosters his freedom, who moves from one place to another, sleeps wrapped up in a blanket at a campfire that keeps wild animals at a distance, one with nature. In this romantic setting no one worries about CO2, greenhouse gasses, and climate change, nobody gives biodiversity a second thought, but instead – the flip side of a cowboy’s life – you have to shoot yourself out of nasty situations sometimes, and have to wear a scarf before your mouth to protect your lungs against the dust.

His opposite, Mr. spaceman, is chained to a ‘ship’ or capsule. He has no fresh water to drink, no fresh air to inhale, no steaks to eat, almost no place to move. His reservoirs are limited. He lives in a cyclical, ecological system, with continuous reproduction of scarce means. If the spaceship is larger and has more people on board, then Mr. Spaceman at least has a social life. Everything is limited in space and as a human you’ll have to adapt yourself to a very tight economical, ecological and social regime.[1] [2]

Who do you think you are, a cowboy, a spaceman, or someone in between? As a cowboy you may be poor and lonesome, but free. As a spaceman you may be rich, surrounded by people, but tinned in a can, like corned beef. As a cowboy you move from place to place, without identifying yourself with anyone else but your self. Posterity doesn’t interest you at all. You’re living now and the women you’ve loved were just temporary sweethearts, like everything else.

Although cowboy and spaceman are two extreme caricatures, there’s some realism in both storylines. A lot of people still live like cowboys. They focus on the short run, discount their own future and even more that of generations to come. Not an applauding audience for Al Gore. According to Kenneth E. Boulding’s classic article on The Economics of the Coming Spaceship Earth, we are now in the middle of a long moral, political, and psychological process of transition of the image which man has of himself and his environment, a transition from ‘the illimitable plane to the closed sphere’, from cowboy to spaceman.

Environmentalists already boarded Spaceship Earth. They stress that we’re running out of elementary resources like oil and natural gas. Without sufficient alternative resources we will have to get used to the idea of a steady-state economy, which is defined by four characteristics:

This may be an ideal model for China and other command economies, but it doesn’t have much chance of succeeding in the free world.

Next question: What are Western countries going to do? First of all: relax. We still have a lot of time left. Conservationist policies are sold by spacemen as something urgent, but that has to do with the supposed short time horizon of the receivers of their doom-message. As a matter of fact we are very busy to expand time horizons. The developments of nuclear energy brought some relieve, but they are not a real solution in the long run. Fusion would solve all our energy problems immediately, but is not available yet. Solar energy has lots of potential. There is plenty of room for substantial, technological improvement here. Some new kids will arrive on the block. In the future we may be running machines on methane-producing algae.

On the material side of life we can improve durability. There is lots of space between eating and being well fed and between nice clothes, fine houses, excellent equipment and worn out stuff. Why should we drive a S.U.V. if there are lovely, small vehicles for sale, powered by solar-thermal? And what about fashionable, electrical scooters in different designs and colors? Another option is: immaterial growth.[3] [4] Shifting the mix away from tons of stuff to tons of quality. Reduce the Growth Domestic Product (GDP). For instance by skipping all paper and read directly from the screen.

On the side of information there is a whole lot of action too. Social networks, Google… Sooner or later that has to come back in GDP. If we do the GDP accounting right. It is quite possible for measured real GDP to rise even if the physical volume of production doesn’t change much. Economics has a hard time measuring quality of life, but in the future we will make progress on that too.

We better pay attention to social themes as well. Justice for all. Freedom of movement for all. Immigrants – many of them from developing countries that suffer from dictatorial regimes – can enter Western labor markets, filling the space left by baby boomers who enjoy their pension. Immigrants relieve Europe’s problem of the distorted relation between 65+ versus 15-65 year old people. An equal chance for all on human welfare is another social goal.

We don’t have to put everyone in a spaceship yet. And it doesn’t make sense to stress that we already are on board of one. We still have a long way to go in every direction before it all collapses. Please enter the future. We’re going have a ice time together!    Enjoy it.

[1] [5] The cowboy-spaceman comparison is coming from Kenneth E. Boulding: The Economics of the Coming Spaceship Earth, in Valuing the Earth, Economics, Ecology, Ethics, edited by Herman E. Daly and Kenneth N. Townsend, The MIT Press, 1993, pp. 297.