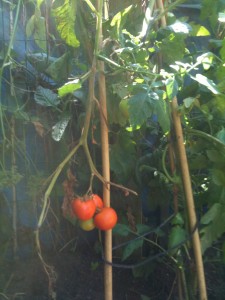 Famine rules, despite all good intentions, politician’s smiles and handshakes, Kyoto’s and Copenhagens. Global stockpiles of corn are predicted to drop to 47 days of use, the lowest since 1974. The harvest was good. Production of rice, grain and corn high. Still food prices rise on almost monthly base. The World Bank estimates that the increasing cost of a meal pushed 44 million more people down under the poverty line, adding them to the group of about one billion extreme poor and needy.

The evildoers are i.e. the use of food for fuel (ethanol) and the massive consumption of meat. (To produce one kilo of animal protein five kilo of vegetable protein is needed.)

But that is not all there is to it. Corruption, dictators and climate change do the rest. Liberal democrat Mr Chris Huhne, former journalist, now energy and climate secretary in the UK held a speech to the British military on Thursday July 7 2011 saying ‘Climate change will increase threat of war’. It was announced in the paper that formerly employed him, the Guardian. ‘Climate change is a threat multiplier. It will make unstable states more unstable, poor nations poorer, inequality more pronounced, and conflict more likely,’ Huhne states. ‘Likely’ in the defense department’s jargon means there is a probability range of 60% – 90% for something to happen.

The Guardian writes: ‘He [Huhne] will warn that climate change risks reversing the progress made in prosperity and democracy since the industrial revolution, arguing that the results of global warming could lead to a return to a “Hobbesian” world in which life is “nasty, brutish and short”. Huhne believes the UK and other countries must act urgently to prepare for the threat. “We cannot be 100% sure that our enemies will attack our country, but we do not hesitate to prepare for the eventuality,” he plans to say. “The same principle applies to climate change, which a report published by the Ministry of Defence (MoD) has identified as one of the four critical issues that will affect everyone on the planet over the next 30 years.”

Given the current food insecurity it will not take thirty years for catastrophe to happen, in the rich West as well. ‘Hunger makes thieves’, a gentlemen explained just the other day, speaking of his youth when his father took him out stealing to survive during the hunger winter of 1944 – 45 in the Netherlands.

‘Grain is a solid input into all food sectors and so there’s really no way to go to avoid grain-based inflation,’ John Bryant, chief executive officer of Battle Creek, Michigan- based Kellogg Co., the largest U.S. maker of breakfast cereal, said in a June 2 conference, according to Bloomberg.

nonfiXe as well as Ecolutie reflect on 50 million climate refugees by the year 2020, people running from floods, drought, hunger and thirst, thriving for clean air and struggling to survive. The Food and Agricultural Organization of the United Nations (FAO) published a global hunger map that leaves no doubt as to how severe the situation already is: half of the earth is colored red.

Whenever there is risk, there is opportunity too. At least Mr Kofi Annan, chairperson of AGRA, seems to think. AGRA is short for Alliance for a Green Revolution in Africa. Mr Annan held a speech at the Royal African Society in London last March, explaining his vision for the poorest of all continents. His view comes down to a major paradigm shift: Africa as a global food provider. The continent can transform its agriculture to grow enough food to meet its own needs, and produce a surplus to meet growing demands across the globe, by working with Africa’s army of small-holder farmers. It contains 60% of the world’s uncultivated arable land, Kofi Annan states. And there is a lot of room for improvement, for example only 6% of the current crop is irrigated (in Asia that is 40%). Africans almost do not use fertilizer and rely on traditional farming – slash and burn for the largest part – which, when applied on large scale, leaves the land poor of nutrients and destroys biodiversity. Mr Annan pleas in favour of empowering smallholders in agriculture, mostly women, providing well functioning markets, knowledge sharing and improvements of the infrastructure. This way Africa can be saved and with it the global challenge of famine, pollution and economically forced migration can be met. Kofi Annan: ‘With the right approach and collective effort, Africa will not only feed itself but can play an important role in shaping a truly secure global food system.’

In his speech Mr Annan makes comparisons with the Green Revolution in Asia. On governmental aspects though Africa might want to follow the example of the EU. Her mission: no war due to cross-continental mutual economic gains in a democratic constellation where everybody is equal and human rights are respected. The European model is far from perfect, but one has to admit that there haven’t been any wars between member states for as long as they are member and the civilians of these nations are free men and women.

Good governance, a vivid civil society and freedom can be seen as the essential steps for sustainable development. And since we all will lose if we don’t change our behavior towards nature and each other, there is a common cause. Like Mr Annan finishes his speech at the Royal African Society: ‘As I have said, the challenges are great. But the prize – a prize within our grasp – is even bigger.’