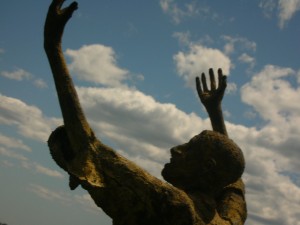 Meltdown. The word revives memories of Jane Fonda, back in 1979, the year of the Second Oil-crisis. Nuclear power seems to be one of the most promising energy alternatives to oil. An alternative with a dangerous hook on it, Fonda shows in the movie the China Syndrome. She plays a reporter who finds a cover-up of safety hazards at an American nuclear plant. The title refers to the concept that, if an American nuclear plant melts down, the core will melt through the Earth [2] until it reaches China [3]. China is simply a popular metaphor, being the opposite side of the globe from the USA.

2011. In Japan, China’s side of the globe, reality presents a remake of the China Syndrome in reverse, with a cast of Japanese citizens. A reporter on the radio speaks feverishly about an explosion; there are rumours of a meltdown at the Daiichi (or No.1) power plant in Fukushima in the wake of a powerful earthquake in the northeast of the country.  One day later, on Sunday March 13, Japanese officials, monitoring the Daiichi plant, state they detected a radioactive byproduct, cesium. This could indicate that some of the nuclear fuel in Reactor No. 1 was damaged and a partial meltdown indeed had occurred. Officials at the plant fill the reactor with seawater to prevent a full meltdown. That same Sunday afternoon the Japanese are facing serious cooling problems at four more power plants. Japan’s troubles feed into a resurgence of doubts about the safety of nuclear power.

The full extent of the damage at the Fukushima Daiichi Nuclear Power Station is yet to be determined. On Saturday, before emergency measures were announced at a second reactor at that plant, Japanese nuclear safety experts rated the accident a four, putting it just behind the Three Mile Island accident in 1979 near Harrisburg, Pa. This accident, the worst in United States history, was designated a five. The movie China Syndrome is based on that.

To place the numbers mentioned above in a perspective; Six and seven designate full meltdown, where the nuclear fuel or core of a reactor overheats and melts. The scale of the ensuing uncontrolled release of radiation that follows differentiates the two. Partial meltdowns, in which the fuel is damaged, are rated a four or a five.

The accident at Chernobyl in the former Soviet Union in 1986 — which killed 56 people directly and thousands of others through cancer and other diseases — was the only nuclear accident so far to have been designated a seven.

What actually happened to the nuclear power plants in Japan and how big the impact will be, is still hidden in the folds of time. But it’s almost for sure that it will have an enormous influence on the unfolding energy debate: which energy source will succeed King Oil? Japan’s policy makers have tough decisions in the making.

Japan is one of the world’s leading producers of nuclear power. Almost a quarter (23.3%) of the total electricity produced in 2007 was generated by nuclear power. That makes Japan the nr 3 nuclear power generator of the world, after the US and France. A year ago the Japanese ministry of industry announced a rapid expansion of its nuclear power capacity. The country feels too dependent on the import of gas, oil and coals, which presently supply more than 80% of its total energy needs. The energy plan, presented in June 2010, is meant to reduce this figure to 30% by 2030. Japan wants to build 8 reactors until 2020. Whether the government sticks to these ambitions has become highly questionable. There was already growing public resistance against nuclear power following a series of accidents in the period 1997-2007.  Fukushima comes on top of that.

More nuclear power was one of the ways to Kyoto, because it is a zero CO2 source.  Japan wants to reduce its carbon emissions by 25% below the 1990 level by 2020 and it will need the nuclear option to achieve this goal. It seems that Fukushima will block the way to Kyoto. Not only in Japan, but everywhere.