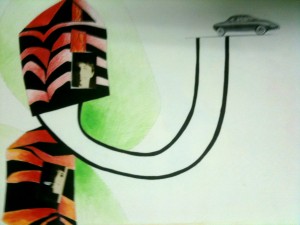 Abu Dhabi is in the news as change-agent for renewable energy and environmental industry. The largest fossil fuel producer of the Unity of Arab Emirates is climbing fast towards the top of sustainable development in order to diversify its economic resources. Already 64% of the total Gross Domestic Product is generated from non fossil fuel sources. Abu Dhabi has a GDP of $ 63.000,- per capita, the highest in the Emirates.

But it looks like the P of People is left out of sustainable development, leaving Planet and foremost Profit and Power as core focus.

Abu Dhabi is the largest of the United Arab Emirates (UAE). The country is inhibited by 1.19 million people most of which – app. 900.000 – live in the city carrying the same name which is Arab for ‘Father of Gazelle’. The wealth of the Emirate is widely known and can hardly be overestimated. Oil and gas made Abu Dhabi’s fortune.

The country is a constitutional monarchy headed by sheikh Khalifa bin Zayed who knows his half brother crown prince Mohammed bin Zayed Al Nahyan close to him. Well aware of what is going on in the world the governors of Abu Dhabi started to diversify their countries sources of income succesfully. Next to tourism, real estate and financial services, ecological development and research became a main focus.

Source of energy and income

A key player in Abu Dhabi is Masdar, commercially driven and totally owned by the governmental Mubadala Development Company. The enterprise was established in 2006 in order to become the catalyst for economic diversification of the Emirate. Masdar is the Arab word for source, which in this case, can refer to source of income and/or source of energy.

The company is widely praised for its accomplishments on research, education and implementation of renewable energy production and environmental industry.

Like the sky scraping city of Abu Dhabi itself, everything is big if not biggest, large if not largest, and shiny. And it is appealing too. Take a look at Masdar City, under construction now, but, according to its own website, aiming to ‘house 40,000 residents and hundreds of businesses and to integrate the full range of renewable energy and sustainability technologies, across a living and working community. As with most dynamic technology clusters, the city has a top-notch research university that is a source for innovation, technologies, R&D and highly skilled graduates.’

Who would not want to live in such a city, where there are no cars in the streets, but an underground magnetic light rail provides individual transportation? Masdar City is designed combining clean technology (zero waste, zero carbon) and renewable energy with ancient wisdom on how to build in the hot Arab area; narrow streets, thick walls, natural air conditioning from wind towers and thousand and one night curves organically weaving the buildings through the city leading to public gardens and theatres.

But the question is, who is actually digging foundations and stapling bricks for the Emirates ecotown and at what cost? Abu Dhabi has a poor record where it comes to human rights for (third world) immigrant workers. March 2010, Amnesty International blogger Seenandheard writes: […] slave-labour conditions inflicted on the workers brought in from the 3rd world-Bangladeshians, Indians, Sri Lankans, Filipinos and now quite fashionable around town, Nepalese workers. Wages are withheld, false ‘visa fees’ are enforced, contracts are broken and when you arrive in the UAE, the construction company or maid service who you signed up with confiscates your passport. If you’re in construction you’ll be shipped to a work camp in the desert and add to the statistics of work-related deaths (and suicides) on-site (168 on record in Abu Dhabi for the year 2004) in the half-completed skyscrapers.’

John Vidal, The Guardian, starts his article on ‘Ecotopia’ with the story of Nayla, a woman who, just like her husband is a working professional in Abu Dhabi, but the family with two children is living ‘in the desert’ in a two-bedroom flat surrounded by rubbish underneath the hot desert sun while paying an astronomical rent. She’ll never be able to live in a place like Masdar City though according to the author the family would be quite well of in a different part of the world. John Vidal adds another observation to this story: ‘The poorest buildings are lived in by the armies of Indian, Bangladeshi, Ethiopian and Somali “guest” workers who construct the extravagant, futuristic cities of the region at breakneck speed, but live seven or eight to a room themselves.’

Planet for the rich

It looks like Abu Dhabi’s progress on sustainability is foremost for the – extreme! – rich, aiming to keep the country and its rulers on top of global energy production and thus on top of Power and Profit. The Planet appears to be a trendy and profitable replacement for oil and gas. This way an unsustainable society of Haves and Have Nots is sustained. Have and Have Nots is one of four scenarios for the future of the Energy World: ‘Beleef 2030’ (written in 2003 in Dutch). In this worldview the rich get richer, better educated and healthier, while the poor rot away in ghettos. The three P’s of sustainability in this type of society are: Power, Profit & Planet.