Power to the City 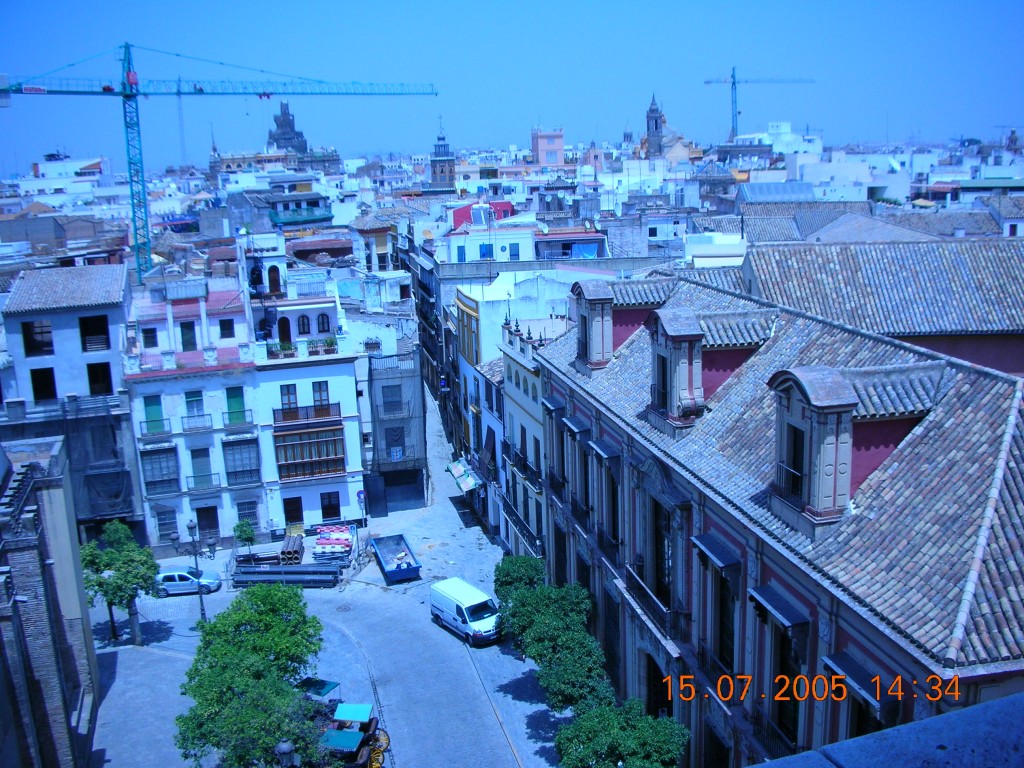 Not nations but cities are the powerhouses of economic life. So we have to invest in the City. Here cross the connections to the qualifications urban, politician, regionalist, progressive and innovation.

When you had long hair, no money coming in, and strong opinions about the unequal distribution of income and wealth in the world, in the Sixties and Seventies you absolutely were classified as leftist. Did you have property, a Mercedes Benz and a built-in reluctance against change, you surely were positioned on the far-right. In the middle of the political spectrum were the people who let others (the Pope, politicians, labour unions)think and decide in their place. Call them the Adaptors or Followers.

The left-right political spectrum is a common way of classifying political positions. In economics the classical distinction is put in terms of free market and command economy. Geografy and (landscape) architecture split the World into urban and rural. Between both poles there is a kind of magnetic field, a tension that extorts change. A dialectic interpretation of the behaviour of complex systems can give an insight in how systems actual work and how people can try to manipulate them.

Thinking in terms of opposites the following sides of a spectrum (qualificatians) present itselves[1]: 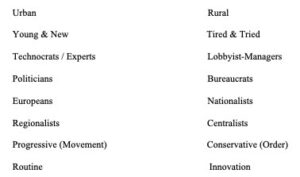 Between the distinguished sixteen poles we can observe the existence of cross connections, that give extra dimension (and dynamic) to the system. As a consequence every analyses of merely two opposite poles is too limited. Only an integral analysis approaches reality, but integrality is difficult to realise. Some connections are unknown, undervalued or forgotten.

With this in mind we try to make sense of a rather hot topic: ‘Smarter Cities’. The British newspaper The Guardian (Leftist in the old model) and IBM (Old Style Rightwing) explored what makes a ‘smarter city’ – a city where those who live and work can enjoy the best quality of life, and where services are efficient, effective, sustainable and meet the needs of the people.

The Guardian and IBM hosted a number of discussion forums, the results of which were published in newspaper supplements. People were asked to give their views about their city, and how they would like to change it for the better.

One of the supplements is about Redeveloping Manchester. The story has several layers, each corresponding with a different view. One of the elements stems from the classic left-right controverse. It’s about how the left tries to re-obtain the initiative – the Power. They’ve lost the command centre Downingstreet 10 to the Conservatives, but try to fight back via the cities, that – of course – have to get bigger, better and smarter to strenghen the image of the Left (Labour, Social-Democrats, Democrats) as excellent governers, and by working together instead of fighting (competition). To quote the Guardian: ‘The constituent parts of the Manchester city region have a track record of working together through the Association of Greater Manchester Authorities (Agma). But we know that to be ready for the challenges and opportunities of the future, to achieve our shared goal of long-term sustainable economic growth, we need to take that cooperation to the next level. What that means is a combined authority for Greater Manchester – able to co-ordinate transport, regeneration and economic development functions across the whole region. A single, powerful and concerted voice.’

To flourish innovation the Manchester region needs the best possible infrastructure, a competitive edge, whether it’s a radically better public transport system or the highest quality, next generation digital infrastructure.

Among the improvements made possible by a £1.5bn Transport fund, using central and local government funding and borrowings, is a doubling in size of the Metrolink tram system, extending it to locations including Manchester airport. The ambition of the local and regional authorities is to have transport powers equivalent to those of Transport for London.

The other kind of new infrastructure is digital. Next generation broadband with ultra-fast connection speeds is being provided to 500 businesses and 1,000 homes and businesses in Manchester’s Oxford Road area – known as Corridor Manchester – in a pilot scheme which, as intended, will roll out across the city. ‘This is about taking a lead rather than waiting for the market,’ stresses the author of this supplement Sir Richard Leese in December 2010. Leese is the leader of the Labour-dominated Manchester City Council. He temporarely stood down in April 2010 after being arrested and cautioned for assaulting his stephdaughter.

In the article he shines like a sun. ‘Parallel to our drive to develop a 21st-century infrastructure,’ Leese writes, ‘is our focus on becoming a low-carbon economy. Our goal is a 30-50% cut in absolute emissions by 2020 – improving quality of life as well as economic growth. That means putting sustainability at the heart of everything we do, from the goods and services we buy to supporting the retrofitting of homes and commercial premises to increase their energy efficiency.’

Reading these beaming words a dark feeling deep inside becomes stronger and stronger. Converted in words the feeling asks: ‘Do people trust a commander who can’t even control his own attitude at home?’ Maybe we’ll have to add two concepts to our list of sixteen: Trust and Distrust.

Without prejudice Smarter Cities is a much more important subject then Sir Richard Leese. Even small cities have discovered city-marketing and the sexy image of ‘being smart’. A smart city, we  read in one of the other supplements, is ‘a city, where those who live and work can enjoy the best quality of life, and where services are efficient, effective, sustainable and meet the needs of the people. According to urbanists like Richard Florida the advent of new ways of living and working (smart cities) herald economic and social change to rival the first Industrial Revolution. New ways of living and working, as well as more technical innovations, usually are developed in times of crisis and depression. If the system is down you’ll have to reset it. It happens.

According to Florida the smart city will pull us into a new period of economic growth. A smart city is a money making machine for itselve and the people who live and work there. Because it’s succesfull a city attracts more and more people and expands through and over bounderies like Tokyo in the seventies ad eighties did. And the other way around: locations rise or fall based on their ability to attract, retain, and productively use talent of all sorts – from brilliant innovators to unskilled laborers. As long as all the people in the city together add value, so: as long as revenues exceed costs, so long the city keeps on growing.

According to the great urbanist Jane Jacobs cities are the true engines of growth, not nations.‘Nations,’ she writes, ’are political and military entities, and so are blocs of nations. But it doesn’t necessarily follow from this that they are also the basic, salient entities of economic life.’[2]

They are not. ‘The powerhouses of economic life,’ she writes a little further, ‘are the cities’. So, in order to stimulate economic growth one has invest in the city, par exemple in high speed rail.[3]

[1] Six of the spectra are derived from Sam Vaknin’s publication Left and Right in a Divided Europe.

[3] China, for instance,plans to spend more then $300 billion to expand its high-speed rail system. By 2020, China will have more high-s peed railway track than the rest of the world combined. And fast they are: 250 mph (402 km/u).