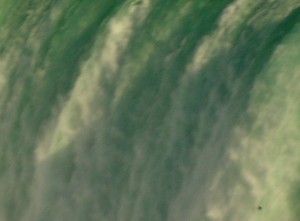 Emission trade frustrates energy transition by giving the wrong incentives. It is better to build new infrastructures for solar and wind power that will last and from which the globe benefits. And, keep it on scale. Big is not Beautiful any more.

Sometimes it is unclear which destruction is on the way. The threat is in the air and nobody knows how to deal with it. The signals are there. In hindsight we detect the pattern easily. The difficulty lays in the recognition at the moment of happening. The problem is to integrate all signals into a coherent story when you find yourself in the middle of the storm. But at some points we feel strongly on what to do. We simply know which is the right action. Mostly this kind of knowledge is fed by experience and intuition. One example out of many has to do with the introduction of a whole new system of emission trade that brings along a series of new institutions on top of all those existing systems and institutions that are already out of control. Let us try to enter the mysterious world of emission trade.

Emission trade frustrates just that what it was meant to encourage: energy transition. It gives the wrong incentives, focussing only on carbon emissions. Meanwhile a brand new trade market a.k.a. institution is being created. This institution will fight for it’s own survival long after the short-term goals are met and thus become destructive, if it isn’t already. It is far better to innovate, concentrate on energy efficiency and build new infrastructures based upon renewable power generation. And, to keep the generation on scale.

China’s angry river, Nu River, now has a real reason to be hot mad as burning coal in hell. The Grand Canyon of the Orient – United Nations World heritage – is going to be transformed by human hands into a power plant, larger than large: 21.3 GW. 13 Dams will be built to feed the growing energy demand of the Chinese economy, according to Jonathan Watts in the Guardian.

Most likely the PR will be: a behemoths’ step in the direction of getting China 15% non-fossil fuelled by 2020. And: no carbon emission. This zero carbon is compensating big coal burning power plants. As Frank van Empel states on Ecolutie: ‘China’s economy already burns half of the 6 billion tons of coal used globally each year. Prices of coal doubled during the last five years. Emissions of CO2 in China went up 8% in the year 2009.’ (While on global level the CO2 emissions decreased, due to the financial crisis)

The building of this huge hydro plant in Nu River looks like the sore result of a global market of trading and fining carbon emissions. In this case it ends up in rewarding the destruction of an ecosystem, that inhabits i.e. 80 endangered species, and threatening the water supply of Thailand and Burma.

Now, while preaching the green adagio, China is acting blacker then the darkest coal and is being rewarded for it. But Big isn’t Beautiful. Big is disruptive. Large operations create imbalances.

A few waves, rocks and blocks away from River Nu South Africa struggles with its power supply, that has been as of and on as the oceans’ tides. Thus frustrating economic growth, which has not been easy anyway since Apartheid ended and the emancipation of the black inhabitants quite justly) raised the wages of most workers. The former black & white country has an enormous amount of coals stacked in the Mpumalanga mines. ‘Hence the Medupi coal-fired plant, which will push out 4.8GW at full tilt once finished, and its sister station Kusile, which will max out at 4.8GW when it is finally finished some time after 2018. Both will rank among the top 10 largest power stations ever constructed. By comparison, the UK’s largest power station, Drax, a bête noir of activists, has an output of 4GW,’ writes Phillip de Wet.

According to Mr. de Wet renewable energy sources like wind and solar power do stand a chance in South Africa, if the implementation means substantial job creation – 300.000 jobs in the next decade.

China and South Africa are two emerging countries that lack the energy necessary to pace up with the West, while that is what they want: after basic necessities like food and drinkable water, shelter et cetera, the people buy refrigerators, turn on air co’s or central heaters, they want to drive cars, own television sets, a washing machine, dryer, dish washer, play station, I pad, you name it. All these shiny devices that make life easy and fun and that cost energy. We have it in the West, Brasil wants it, China, South Africa, everybody! And our numbers are growing. Predictions tell that the world population will rise from 6.9 billion to 9 billion by 2050. The growth of the amount of cars in percents is already faster: 100% increase from 1 billion vehicles worldwide to 2 billion worldwide, according to Shell. 40% of these cars shall be electrical cars, the CEO of the oil company predicts. Well, that’s an advantage for the environment, one might think, but this advantage highly depends on how the electricity for these cars will be produced: black or green?

China is building power plants that are bad for the environment (zero carbon or not). Africa, not only South Africa, but the whole continent, desperately needs a power infrastructure to rise from poverty. These nations are right and wrong at the same time. If you are building a new house, why then copy the wrongs of the already built neighbours’ mansion?

The apparent reason is costs. Renewable energy production is profitable as trick & trade in the carbon emission swap, plus it makes one look good, but fossil fuels remain much cheaper to turn on the lights.

Some, like Mark Hankins writes in Renewable Energy World, think the panacea is to be found in the market: ‘There is a need for a shift in focus on solar markets in Africa away from donor and rural electrification projects to commercial and productive investments. There is also a need for the international PV industry to aggressively invest in the development of solar markets and not to leave it up to aid and relief organisations. This must be based on the need to move – today – towards grid-connected and urban markets. As part of this process there is a need to engage and educate African governments about the current global status of the solar sector and help them build frameworks for industry growth.’