The essence of banking 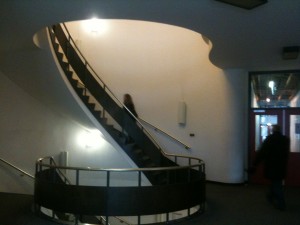 Conventional banks are outdated. They don’t deliver what they were created for: trust and cheap money to make the world a better place to live in. They failed. So let’s skip the banks and replace them by ‘common units’ that act according to promise instead of milking their cattle and hunting huge profits, which go up in smoke. Greed is not enough. We need community instinct as well.

The essence of banking is simple: you take in savings at a relatively low interest rate and you loan the tenfold or so out to someone else at a much higher rate. The fatter you are, the more you can loan out. That is why banks like to eat other banks. For example: a bank that has €100 million in pocket can loan out €1 billion. A bank that has €200 million of savings at the credit side of the balancesheet has €2 billion to push around in search of the biggest profit. So far, so good. If the bank is loaning the extra money out to start ups and other small and medium sized businesses that desperately need money transfusions to keep on growing, everything is okay. But the free market system doesn’t work like that. To satisfy shareholders banks have to keep on growing year after year themselves. The easiest way to grow faster is to lend large amounts in the money market in order to acquire other banks before getting acquired by them. Eat or be eaten, that is the name of the game. Getting big without getting fat is the way to survive. Big banks don’t go broke. They are always saved by the central bank and the government, because of the impact that discomfiture would have. And so Big banks go for Big deals with Big companies and Big governments. That’s the highway to success. Small companies ask too much time and money.  Customers with a current account, a simple mortgage, and some savings are considered cattle. They deliver the milk and the meat banks need so badly to keep on pushing money around and around the globe.

When a bank starts, it has a simple mission. Soon the mission becomes business, business becomes big business, until the original backbone – the hardworking, sober customer – is completely out of sight and replaced by routines. Young urban professionals with a degree in finance design new ways of making money that have nothing to do with the original mission and for that reason often are kept off the balance. Let’s look for instance at ING Group, the big Dutch Money Pusher. It has swallowed the solid saving machine Postbank where a lot of older people had put their spare money for years and years at a low but guaranteed interest rate. ING also swallowed the bank for the self-employed, the NMB Bank, and used the extra capital to blow up its own balance.

The Centre for European Policy Studies has calculated that in 2007 ING Group had a multiplier of 35. That means: for every euro it angles, it has loaned out 35 euro. When including the risky off the balance activities the multiplier gets even higher: 49. In numbers we are talking about assets of €1.370 billion, or 1.370.000.000.000 euro, 300% of Dutch GDP. Banking this way is like playing Russian Roulette with 5 of 6 chambers of the revolver filled. Big government prevents pulling the trigger; a financial powerhouse like ING Group simply is too big to die.

ING Group is not the only bank that grew out of proportion. The biggest bank of Iceland, Kauphing, in 2007 had assets of €53 billion, or 623% of Icelands GDP. The Swiss financial powerhouse UBS has made it to €1.425 billion in assets, or 484% of Swiss GDP. Numbers too big to get crunched by human brains. Numbers that have their origin in human behaviour, the temptation to live now and pay later, to be greedy, to overshoot, get frightened by a sudden crisis, hit the brakes, etc. People can go broke and so do companies. In less than a year the financial pages of the Wall Street Journal have lost five illustrious names: Lehman Brothers, Bear Stearns, Merrill Lynch, Morgan Stanley and Goldman Sachs. Investmentbanks that tried to jump too far.

The financial crisis of 2007/2008 is just one example of the slack that comes into a system when the traditional mission, the reason why organizations are on this earth, is forgotten. People don’t like their banks gambling with their money. Moreover they want to be treated with respect and dignity, not as a number. If banks don’t deliver on those two aspects – and they don’t – we better replace them by institutions that live up to the needs and expectations of customers, humans and organizations alike. Lets call it Community Trusts or Financial Cooperatives, or choose a new name – ‘Common Units’ – to stress that we are talking about a new breed of financial and other houses with rather old values and sound ethics. For instance the value that claiming high interest rates as a compensation for lending out someone else’s money and, on top of that, extra money that has no backing in reserves, is a perverted thing to do. Back to the essence: people bring their savings on a local or regional scale together in order to loan them out (no multipliers here!) for a very low price or for 0% interest to people in the same community – ‘I know you, you know me’ – who need it for their family or to invest in activities that may deliver earnings in the near future. Rabobank, the biggest bank of the Netherlands started that way more than a hundred years ago as an initiative of the self-employed, farmers, businessmen and other entrepreneuring people who didn’t have (enough) access to the financial wells of that time. The same spirit is rising these days. If the banks, energy companies, building companies, housing corporations or whatever businesses don’t deliver anymore, people step in and do it themselves. They join forces and get stronger everyday, taking care of their own money on behalf of their ‘Common Unit’.

One example of the ethics of a banker:

And: ‘The 55-year-old chief executive was awarded stock options worth $17m and a “cash incentive” of $5m in 2010, on top of his basic salary of $1m.’  Apart from this Mr Dimon was compensated for moving with his family to Chicago: Documents filed with the US Securities and Exchange Commission also show JP Morgan paid Dimon $421,458 in moving expenses, $95,293 to cover “personal use of aircraft” and $45,730 for “personal use of car”.

JP Morgan explained the Dimon family had moved from Chicago to New York in 2007 after their children finished high school, but only found a buyer for their old house in 2010. The moving expenses include more than $300,000 in real estate agency commission and fees, but do not cover the likely fall in the value of the house due to the slump in the US housing market.

Additional background, check the articles about democracy and unconventional banking. These writings are in Dutch.